Posted by Mrs C Mann on December 14, 2016
On Monday 28th November 2016 the girls and boys swimming teams took part in the WASP Swimming Gala at Wantage Leisure Centre.
Each team had 4 swimmers taking part in individual and relay swimming events.
The boys’ team started the morning with the freestyle relay, being just pipped at the post and finishing in 2nd place, however the girls had a very convincing win in their race.
In the individual races there were wins from Caspar, Edgar, Ethan and Isabelle, with all the other swimmers finishing second or third in their races.
In the medley relay the boys and girls both led the way and both teams finished in 1st place.
While the organiser worked out the final results both teams swam together in a fun freestyle relay of 8 swimmers. Wantage won the race by one whole length which everyone was excited about.
The final results were announced. Wantage were the winners of the boys’ competition with a score of 11 points, and the girls won their competition with a very low score of 10 points.
Both team have qualified to compete at the Vale round next year. 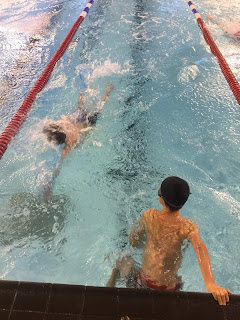