Posted by Mrs C Mann on January 30, 2017
Vale Sports Hall Athletics
On Tuesday the 24th January a team of 19 children attended the Vale Sports Hall Athletics final at Wantage Leisure Centre. The children were not only competing against the Wantage and Faringdon schools that attended in the afternoon but also against the Abingdon schools that had taken part in the morning.
The children took part in track and field activities such as obstacle race, over under race and varying lengths of relays as well as speed bounce, javelin, chest push, verticle jump, long jump and triple jump.
The final results were announced and Wantage were announced the overall winners 2 points ahead of Millbrook School! The team will now attend the Oxfordshire School Games Final and represent the Vale. 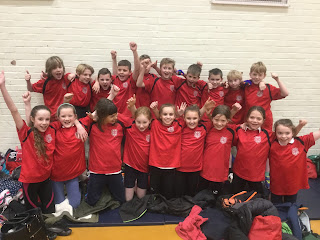