Posted by Mrs C Mann on May 26, 2017
On Wednesday 24th May the year 3&4 children took part in quad kid’s athletics at King Alfred’s, East Site.
There were 2 teams: Wantage A and Wantage B with 20 children in total taking part. Each member of the team took part in the 400m distance race, a 50m sprint, standing long jump and vortex throw.
We had lots of wins during the afternoon and many best performances. Alfie threw the furthest of the day in the vortex and ran the fastest in the sprint.
The final results were announced Wantage B finished in 9th place out of 12 teams and Wantage A finished in first place. We also had two individuals who were in the top three, Estelle in 2nd place and Alfie in 1st place. The team will now represent the Wantage Area in the Vale trials.

On Thursday it was the turn of the year 5&6 children. Again 20 children took part, however they had a bit further to run than the year 3&4 children doing a 600m and 75m sprint. Again there were many great performances with lots of wins in both track and field events.
The results were announced, Wantage B finished in 5th place with 1315 points and Wantage A in 1st place with 1526 points! We also had some individuals in the top three with Rachel Webb in 3rd place despite a very big fall in her 600m and Alex Lock in 1st place.
Well done to everyone who took part. 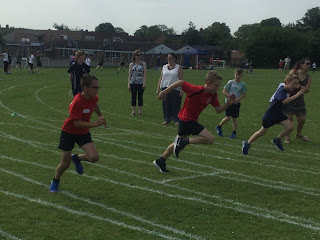 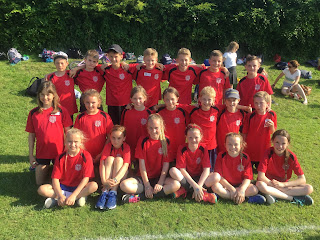