Posted by Mrs C Mann on May 15, 2017
On Wednesday 10th May 2017 the tennis teams from Wantage took part in the Wantage Area Competition.
Each team is made up of 2 boys and 2 girls with each player seeded from 1-4. Wantage A team played 3 matches against Stanford B, St Nics B and Millbrook A winning all three of their matches securing them a place in the semi-final.
Wantage B played against Stanford A, St James and Charlton winning 1 of their matches out of the 3. Unfortunately they did not progress any further despite playing some tennis.
In the semi-final against Ridgeway, Wantage won securing them a place in the final. The final was played against St James and was very close with 2 matches won and 2 lost for each team which meant it would come down to point difference. The scores were worked out and Wantage won by 2 points!!
We wish the team the best of luck in the Vale Round next month. 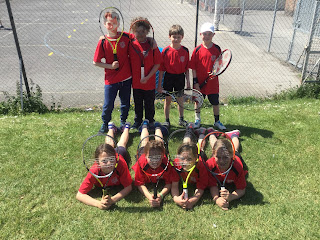 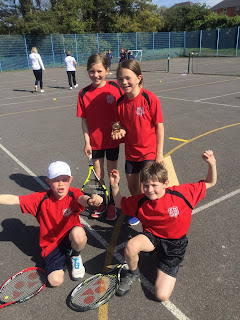