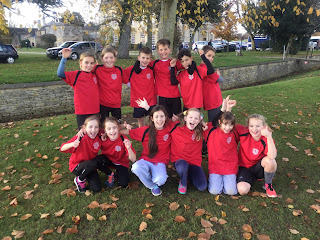 On Friday 17th November a group of 12 children took part in a Cross Country event at Cokethorpe School.
The Year 4 girls started off the afternoon with their race running 1.6km. Kara led the girls home in 13th place closely followed by Alice in 14th, Olivia in 15th and Jessica in 34th place.
Year 5 had to run 2km, with the course being much longer than they were used to running. Evie ran a fantastic race against some tough competition finishing in 11th place.
The year 6 children had to run 2.4km. Mia and Rachel battled against some tough competition in this very close race. Rachel finished in 7th place closely followed by Mia in 8th place.
The last race of the afternoon was the year 6 boys. Caspar led the team home in 3rd place, he was closely followed by his team mates with Edgar 8th, Charlie 19th and Alex in 25th.
This was a great experience for the children and gave them the opportunity to compete against children of a very high standard around a tough course.
At the end of the afternoon all their hard work was rewarded with a hot chocolate and doughnut !!