Posted by Mrs C Mann on November 09, 2017
On Tuesday 7th November in some wet conditions our 2 rugby teams attended the Vale TAG Rugby competition at Grove Rugby Club. Our B team played in pool C, they lost their first 2 matches by one try. In their 3rd match against Longworth they won 4-3 and again winning their last match against Thomas Reade. This placed them in 3rd place in their league not quite enough points to progress further. The A team place in pool E against Thameside, North Hinkey and Longworth and won all of their matches securing them a place in the quarter final. They played the quarter final after a warm cup of hot chocolate winning against St Nicolas School, Abingdon. Next was the semi-final in which we played Sunningwell which was the team that won against our B team! It was a very close match but we won 2-1 and ready for the final! This was another very close match against Millbrook (the team who won against us in the WASP Tag Rugby competition) with Millbrook winning with the final try and a score of 2-1. A great afternoon was had by all the children not only enjoying the rugby but also a hot chocolate!! 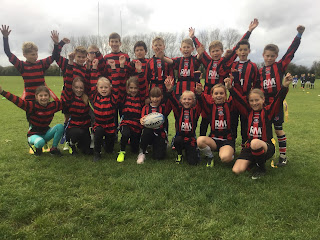