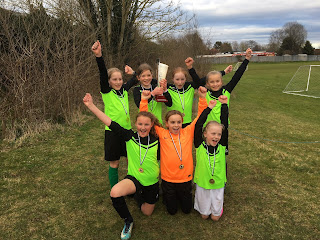 On Tuesday 27th March 2018, the girls football team took part in a 6 a side Football competition at Our Lady’s Junior School.
The team played in Group A and won both of their matches against Botley and Stephen Freeman putting them at the top of their group and securing a place in the Semi-finals.
In the semi finals against Long Furlong the girls had a fantastic match and won 6-0 giving them a well deserved place in the final.
The final was played against Northbourne it was a very close match with both teams having chances at goal however in the last minute of the match Wantage scored and won the competition.
Take a look at the fantastic trophy when you next walk to the hall!
Well done to all of our team: Rachel, Lucy, Rubie, Lacey, Rosie, Ava and Mia.