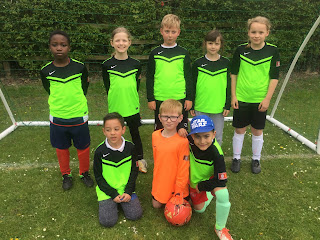 Vale of White Horse Year 3/4 Football
On Tuesday 24th April 2018 the year 3/4 football team took part in a football festival at Hagbourne Playing Fields.
The aim of the competition was to give the children the opportunity to play some matches and introduce them to competition.
The team played 5 matches during the afternoon and showed great sportsmanship and determination.
Alice was praised for her great play in the match against Hagbourne Primary School from the head at Harwell School.
In the match against West Oxford Alfie shone in goal and was awarded player of the match by the head teacher from West Oxford Primary School.
In third match against Stephen Freeman, Szymon showed great sportsmanship by being honest and this was noticed and praised by the staff.
We won two of the matches during the afternoon with goals scored by Szymon, Alice, Livvy and Alfie.
Well done to everyone who took part and for representing Wantage so fantastically.
Football