The Tennis Team attended the Vale Tennis Final on Wednesday 6th June 2018 at Faringdon Tennis Club.
The team was made up of 4 players: Henry, Dan, Rachel and Estelle. We had to play each school during the competition and only one team would qualify to represent the vale at the Oxfordshire School Games.
Our first match was played against St Nicolas and was a win with Henry, Rachel and Estelle all winning their games. In the second match against Buckland it was a close match with Henry, Dan and Rachel all winning their matches and Estelle only losing hers by one point.
Our third match was against Long Furlong and we secured a great win with all our team winning their matches. Finally we had to play Cumnor who had also won all their previous matches. It was very close in all 4 matches however we managed to stay calm and with Henry, Rachel and Estelle winning their matches we finished in first place overall!
I would like to wish the very best of luck to the team when they represent the vale at the Oxfordshire School Games. 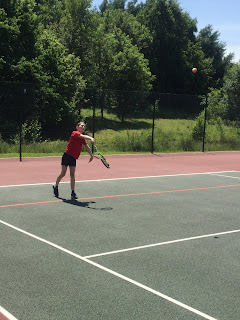 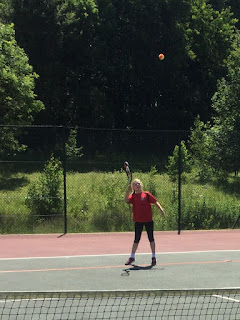 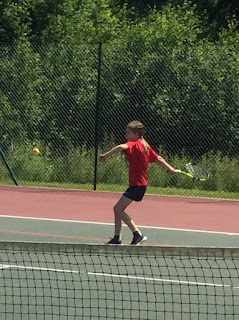 On Wednesday 23rd May 2018 the Year 3/4 children took part in the Quad Kids Athletics competition which was held at King Alfred’s East Site. Wantage had 2 teams of ten children take part with all the children competing in a 400m, 50m, Standing Long Jump, Vortex Throw. The teams had a fantastic day with many first place finishes in many events. Wantage B came 8th and A finished in 2nd place In the individual standings three of the year 4 girls finished in the top three with Alice in 3rd, Olivia 2nd and Kara 1st place!   The day after the Year 5/6 children took part in their competition their events were a 600m, 75m, standing long jump and vortex throw. The teams again had a fantastic afternoon with Wantage B finishing 5th place and Wantage A finishing in 2nd place. In the individual standings Rachel finished in 1st place overall and Ethan finished in 3rd Place.     Both A teams will be representing the school at the Vale final in term 6.

On Tuesday the 20th November we participated in the County Dance Show at the Oxford New Theatre. We spent lots of sessions before and after school choreographing a dance with the help of Millie and Erin from King Alfred’s. Our song was ‘Never fully Dressed without a Smile’ We had to decide on an outfit to wear and we choose an American T Shirt, Black leggings and our hair in bunches with red, white and blue ribbons. On the day we caught the bus from Wantage town to Oxford, we sat at the back of the bus. When we arrived in Oxford we went straight to the theatre for our rehearsal which went really well. The stage was really big! After this we went for lunch at McDonalds, I had a chicken nugget happy meal and a McFlurry which was delicious. We headed back to the theatre and got our hair, makeup and clothes ready. We had a sudden change of hair and decided on French plaits into bunches which Mrs Brew did for us all. Once we were all sparkly we were ready. We watched the first h